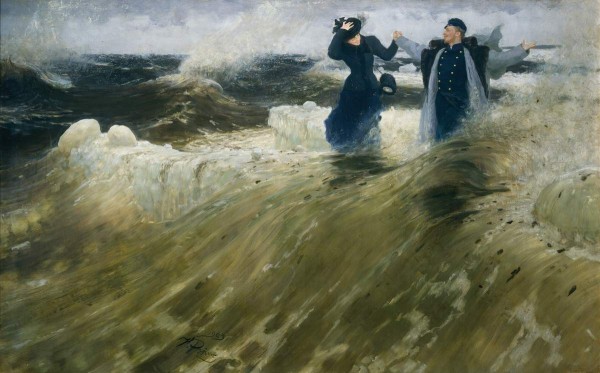 What an Expanse! was shown for the first time at the Thirty-First Travelling Art Exhibition. Painted on the background of the various movements in Russian painting at the start of the twentieth century, this unusual work was created in a state of romantic elevation and attracted universal attention. Ilya Repin claimed that the work was inspired by a spontaneous impression from life in Kuokkala on the Gulf of Finland. Reviewers of the exhibition, however, discerned a hidden allegory in the images of the young man and woman dashing through the crashing waves. Russian public life in the early 1900s was too intense for such an astute artist as Repin not to impart the canvas with social meaning, albeit in an allegorical form. His work gave birth to a series of different interpretations. Some saw it as a personification of the attempts of young Russian artists to strike out for “new shores”. Others perceived the fierce yellow-green waves and ice-floes as a metaphor for the cold and stormy life into which young Russians are often flung. The critic Vladimir Stasov summed up the conflict by concluding that the work depicts “the youth of Russia, who never lose sight of their audacious expectations and joyful hopes, not even when swamped by adversity.”