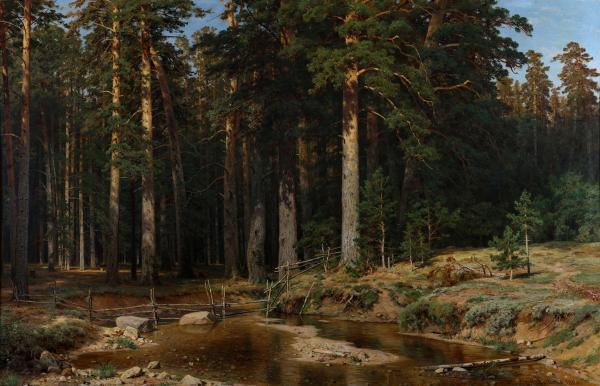 This work is an excellent example of Russian Realist landscape painting in the second half of the nineteenth century. At the beginning of 1898 Ivan Shishkin, then aged sixty-six, produced a picture that revealed for the last time the artistic capabilities of the grand old man of Russian landscape painting, (Soon after completing his work, on March 8, 1898, Shishkin died). This was Mast-Tree Grove, a canvas that synthesised, as it were, the various facets of the master’s creative manner. A well-composed work and one of his largest, it produces an impression of monumentality, of stately grandeur and tranquility. The motif is familiar to Shishkin from childhood and was presented in many of his previous works. The mast-tree grove near Yelabuga is painted here from almost the same spot as the picture Pine Forest (1872). Rising toward the sky, the pines srtetch beyond the limits of the picture. Several trunks in the centre are highlighted by the sun; at the right is a dense mass of green, at the left the transparent depths of the forest, side by side with the venerable giants young pines are growing; felled saplings span the rivalet, and in the foreground there are two butterflies on the wing. The mighty is here offset by the weak, the great by the small, the aged-old by the ephemeral, but these contrasts are perceived as natural and truly expressive, not in the least bit contrived.