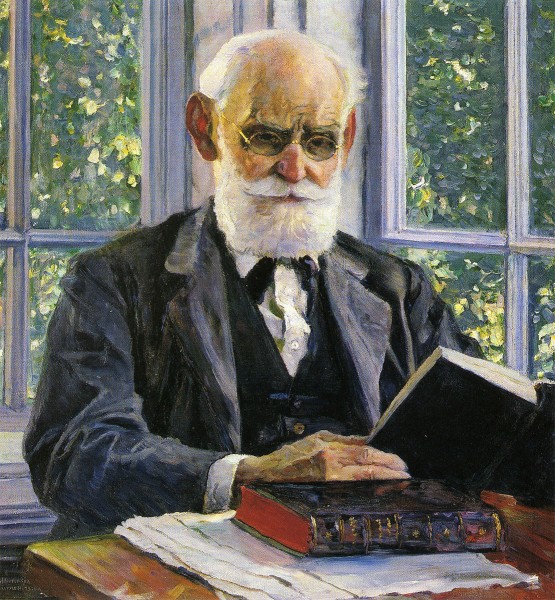 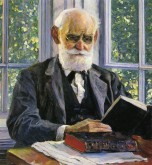 In 1925, in one of his letters to his biographer, Mikhail Nesterov noted that he had for many years been living not among the “brotherhood” of artists, but among professors and scientists. Such people urged the artist to paint a portrait of Ivan Pavlov, showing him photographs and portraits of the famous Russian scientist. Their “matchmaking” had little success until the two men actually met in 1930. Nesterov was taken by surprise: “Ivan Pavlov was not a bit like the ‘official’ photos I had been shown. I resolved to paint his portrait.” This meeting marked the beginning of a long and close friendship between the artist and the scientist. Invited to the scientific “village” of Koltushi, Nesterov decided to paint a portrait of Pavlov sitting on the covered veranda where he liked to work. The artist’s interest in the scholar’s personality and “explosive” temperament is reflected in the speed with which he painted his portrait. Finished after only three weeks, Portrait of Ivan Pavlov was acquired by the Institute of Experimental Medicine. After Pavlov fell seriously ill in 1933, Nesterov decided to paint a second portrait, which was immediately acquired by the Tretyakov Gallery in Moscow. Nesterov presented Pavlov with a repetition of the first portrait on his eightieth birthday. In 1940, the Institute of Experimental Medicine presented the original portrait to the Russian Museum, retaining the repetition for itself.

After Ivan Pavlov’s death, Nesterov spent several summers in Koltushi at the invitation of his family. He later wrote memoirs of Pavlov and the history of the creation of the portrait.