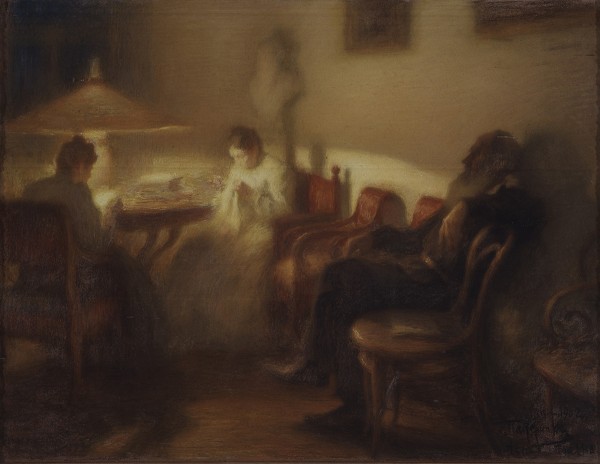 Leonid Pasternak’s oeuvre was heavily influenced by Leo Tolstoy’s philosophical ideas. The artist illustrated War and Peace, Resurrection and many other of the writer’s works. Pasternak rejects the traditional image of Tolstoy sitting at his desk, creating a heartfelt image of the great Russian novelist in an everyday setting. The light from the lamp on the table illuminates a corner of an old drawing room, showing the writer’s eldest daughter sifting through her father’s mail and his wife engaged in sewing. Tolstoy himself sits in a comfortable pose at a slight distance, listening to his daughter reading. The writer’s head and thick beard stand out against the light wall. The theme of the work is the harmonic unity of man and his emotionally interpreted environment, perceived as a spiritual “portrait” of its inhabitants. The fragmentary nature of the composition evokes the effect of habituality, while the flowing pastel strokes create the sensation of intense spirituality. This Impressionist group portrait thus becomes an important document chronicling the intellectual life of Russian society at the start of the twentieth century.