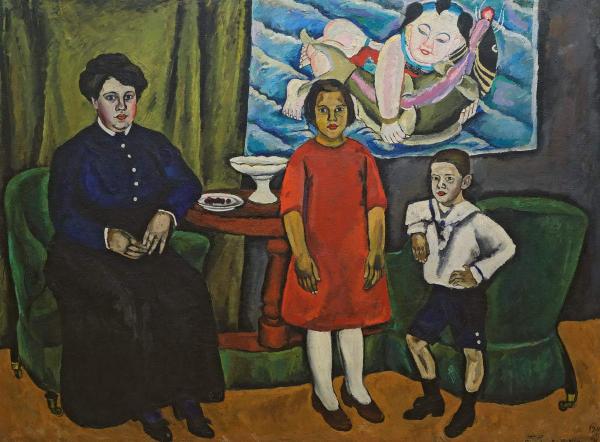 Pyotr Konchalovsky painted this portrait soon after his return from Spain, a country that made an important contribution to his art. He himself wrote about the influence of his Spanish impressions on the portrait: “For me, Spain was a poem of black and white … All the time I lived there, I was haunted by the thought of mastering the art of simplified synthetic colour. I resolved this task in a portrait of my wife and children painted in 1911. This portrait is dominated by two colours – black and white. No matter how strongly red and green are given, they play a strictly subordinated role; their task is merely to underline the resonance of the two main notes of the portrait. The Chinese picture in the background serves to accompany these main tones.” The closest source of primitive grotesque, however, is the fairground photo­graph, always popular with the Jack of Diamonds.