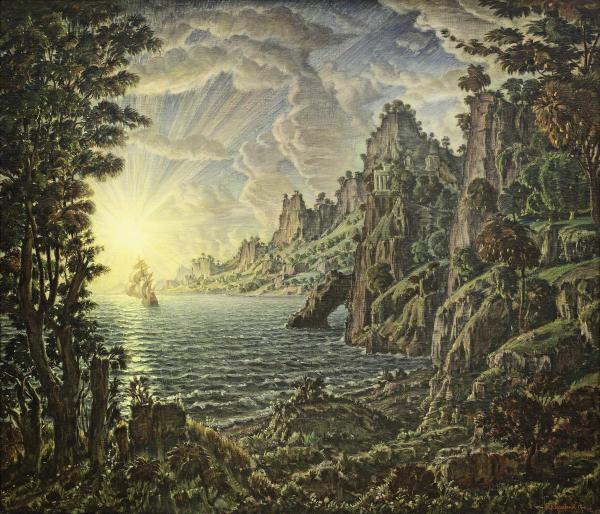 Konstantin Fedorovich Bogaevsky was the creator of a unique genre of epic romantic landscape. Though he was born in Feodosia, the city of Aivazovsky, a passionate and brilliant romantic marine painter, Bogaevsky did not get under his influence and managed to find his own way. He was a pupil of Kuindzhi, but never mimicked his style, which shows Bogaevsky’s independent view of the world around. Being a romanticist and a lyricist, he followed his own path in landscape painting. Maximillian Voloshin wrote about the motif that Bogaevsky began to develop in 1910-1920: “Bogaevsky was the first to paint the Face of the Earth. His pictures reveal the ancient face of the planet, a tragic mask with a frozen expression of grief and thrust”. The artist tried to develop the romantic themes of the paintings by Lorrain – travels in search of a land of harmony inhibited with perfect people. This painting is also dedicated to this motif.

In November1911 the artist wrote: “I am very excited by ships right now. I make pencil studies for paintings and big ink drawings”. Abundant and luxurious Nature is illuminated by the shining Sun, and this light gives the picture a very optimistic tone. This is one of the best works by Bogaevsky that is full of romantic thrust, a striving for the transformation of the world, and reality is given colossal, cosmic depth. Some researchers call Ships by Bogaevsky an homage to Claude Lorrain.