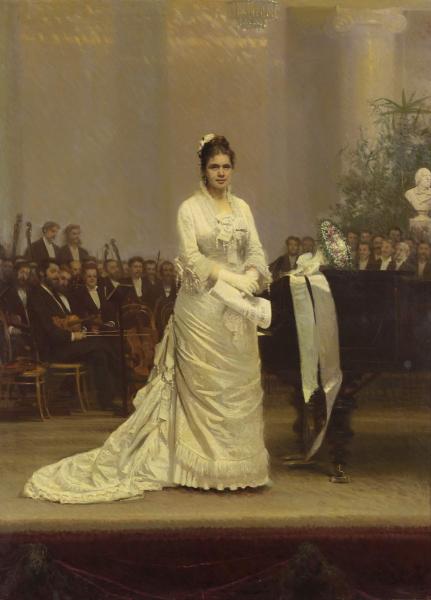 Elizaveta Andreevna Lavrovskaya (1845–1919) was a Russian opera singer (contralto) and a tutor. In Baden she took lessons from the famous Pauline Viardo. She toured a lot around Russia and abroad and performed in London, Paris, Berlin, and Milan. These tours brought her world fame. In Paris her performance as attended by G. Rossini and the director of Grand Opera that spoke very highly of her talent. Her vocal range and pitch of the voice were considered unusual and unique. I. Kramskoy depicted Elizaveta Andreevna Lavrovskaya on stage in the Hall of Nobility in 1879when she was one of the lead singers of the Mariinsky Theater. P. Tchaikovsky considered E. Lavrovskaya one of the most distinguished representatives of the Russian singing school. He mentioned her “excellent, velvet-like, rich voice”, artistic simplicity of performance, deep insight into different musical styles. Tchaikovsky wrote: “What is the most precious in Lavrovskaya is that she never uses any effects, any theatrical exaggeration to charm her audience. She never submits to the general and widely-spread routines and effects that are so popular on the Italian stage. Lavrovskaya never falls beyond the limits of her strict and pure art...” Many famous Russian composers dedicated their romantic songs to E. Lavrovskaya including P.I. Tchaikovsky (Bedtime, Look, There’s a Cloud, Don’t Leave My Side, My Playful Girl), S.V. Rakhmaninov (She Is as Beautiful as Midday, In My Soul), S. Taneev (People Are Sleeping) and many others. The portraits of the singer were created by I. Kramskoy and V. Makovsky.