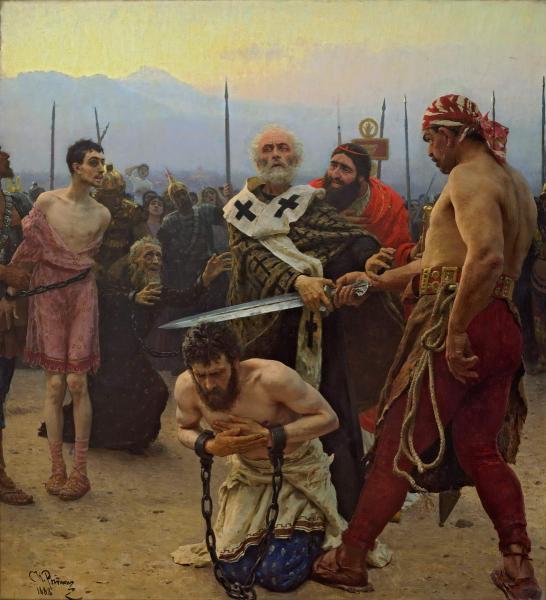 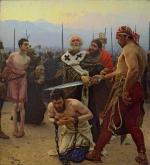 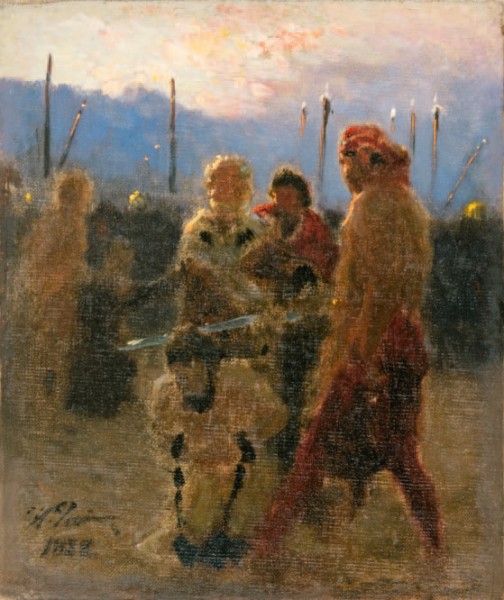 Ilya Repin got the commission to paint the Saint Nicholas of Myra (Nicholas the Wonderworker) from the Abbess of the Nicholas Convent in the village of Strelechie of the Kcharkov district. The artist came here to visit his cousin Emilia (known as Evpraksia when she became a nun). The artist had been working at the painting for four years.

The subject of the painting refers to one of the deeds of Saint Nicholas (approximate dates are 270-345 AD) that he did while being a bishop in Myra in Lycia (in the Turkish Province of Antalya in the present time). It is the name of the town of Lycia that gives the well known sobriquet of Saint Nicholas – Saint Nicholas of Myra.

While being away Saint Nicholas learnt that the Governor Eustathius, who had been bribed, had condemned three innocent people to death. Wishing to prevent the injustice Nicholas came back in a hurry to Myra and arrived at the place of execution at the very moment when the executioner was about to carry out the sentence. He rushed to the executioner, grabbed the sword from his hands, and threw it to the ground. Then he released the condemned.

The painter depicts the moment when Nicholas the Wonderworker is stopping the executioner’s sword that is raised over the first of the condemned.  The painting represents the contrast between the characters: the toughness of Nicholas of Myra who is sure of his rightness, the surprise of the executioner, the afraid, flattering expression of the governor (“a Byzantine courtier”) and the faces of the condemned who didn’t believe that they could be rescued. One of them is depicted as obedient, the other looks puzzled and the third is in a burst of mad hope.

This theme was similar to the moral sermon of Leo Tolstoy and the discussions on  the abolition of the death penalty. The canvas was exhibited at the 17th exhibition of The Society of Travelling Art Exhibitions where it was purchased by Emperor Alexander III. It was the purchase of this painting that led to the decision to establish the Russian Museum.