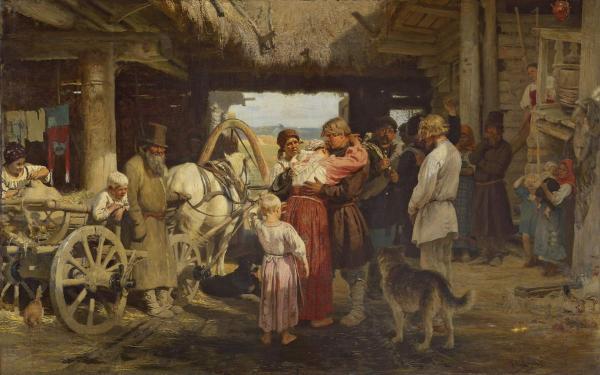 Seeing off a Recruit

In the end of 1870-s, after returning home from a foreign trip, Repin started to pay special attention to the life of peasants. This interest was reflecting in his major work on the topic – Seeing off a Recruit. The painting was created under the influence of the Russo-Turkish War of 1877-1878. The artist depicted one of the most touching moments – a farewell bid by the family to a young recruit. The scene takes place in a typical country yard that the painter found in Bykovo village in the vicinity of Moscow. All feelings of the characters are expressed in a simple, clear, and sincere way. The artist thoroughly prepared for this panting and created numerous studies for it. The work was being painted in 1877-1879 in Moscow and in summer – also in the vicinity of Moscow, in Abramtsevo, a homestead of the famous art patron Savva Mamontov where famous artists and musicians used to meet. Immediately after the painting was finished it was purchased by the President of the Academy of Arts, Grand Duke Vladimir Alexandrovich.