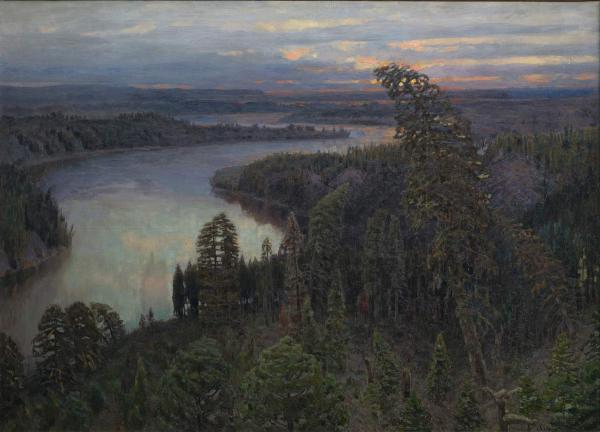 In the Vasnetsov’s works there was neo-romantic tendency of Russian landscape painting of the turn of the 19th – 20th centuries. The development of his talent was promoted by the lessons of his brother - the famous artist Viktor Vasnetsov. This young man from Ryabovo village in Vyatka region, who didn’t get a systematic professional education, was fond of Russian ancientry. He was also influenced by the atmosphere of creative research in the Mamontov circle, whose full-fledged participant in the early 1880s he was. Ilya Repin and Vasily Polenov became his mentors.

The paintings of the 17th century Moscow made in the 1890’s , which glorified the artist were preceded by the group of large-format paintings that epically interpreted images of the Urals, Siberia and the North. One of them is “The Northern Land". Vasnetsov produced the painting on the base of the materials from his trips to the Urals (1899). It completes the series of monumental epic paintings dedicated to the Urals and Siberia (the series also includes the paintings "Kama", "Taiga", "Lake"). In his autobiography the artist wrote: "The character of the Urals, where my brother Arkady lived, and its nature strongly reminded me of Vyatka region. The same coniferous forests, hills, but only of great sizes, and the forests - the bristle of the taiga along the mountain ridges: instead of lone firs there are giant cedars. They reminded me of my dear Ryabovo."

In this work Vasnetsov shows himself as a mature master with his own well-established artistic system.

The panorama of the Siberian vastness with a deep and majestic river turning away behind the horizon opens to the viewer.

A severe evening sky reflects in its calm waters. The endless forest landscape appears to be mysterious. The artist used a tense range of colors, conveying the condition of nature in anticipation of the night. Dark green, gray, blue and scarlet tones of the "northern land" create the mood of anxiety and power, captivating the viewer.