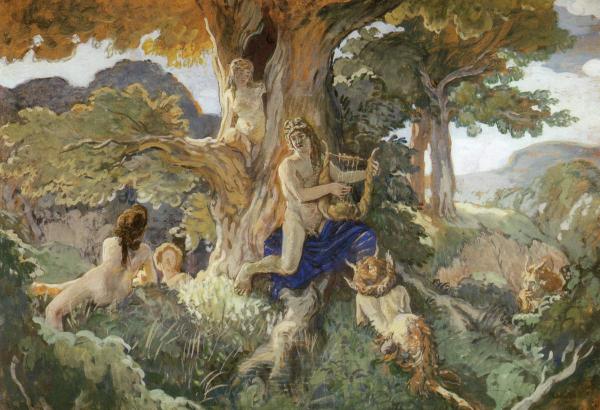 Apollo and Daphne (Apollo’s Song to Dryads and Fauns)

Daphne — an ancient floral deity which entered Apollo's circle, having lost the independence and having become the attribute of god. Dryads — female spirits of trees.
The story of Apollo and Daphne’s love was told by Ovid. Daphne made a vow to remain a virgin and never marry. Apollo, wooing the beautiful nymph, induced horror in her. Through his blinding beauty she saw ferocity in him.
- Why are you running from me, nymph? – He cried trying to overtake her. – I am not a robber, not a wild shepherd! I am Apollo, son of Zeus! Stop!
Daphne begged for the help, and gods turned Daphne into a laurel tree. Apollo embraced fine laurels in vain, but then he made it a sacred plant and decorated his head with the wreath weaved of laurel branches. The Homeric anthem reports that there had been predictions from the tree of laurels. During the Daphnephoria in Thebes laurel branches were carried.
In the course of reconsideration of reality that is so characteristic of the artists of the "World of Art" society, A. N. Benois addresses not only the subjects from the French or Russian history, but in some cases, the ancient mythology, too. The composition created by the artist with Apollo playing on a cithara surrounded by nymphs and satires quite reflects the aesthetic principles of the author.
Publius Ovidius Naso (43 BC – 17 or 18 AD) — an ancient roman poet who became famous for his love elegies and two poems the “Metamorphoses” and the “Art of Love”.
«Виртуальный Русский музей» в социальных сетях:
top