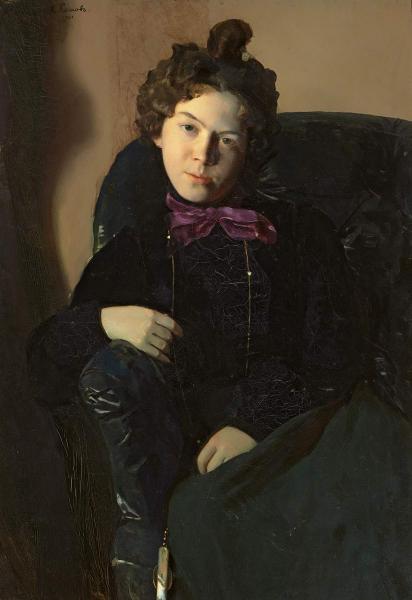 The works of Konstantin Somov, with their retrospective stylised design, delicate taste and cultural knowledge of the past, are characteristic of the World of Art movement. He studied at the Imperial Academy of Arts with Anna Ostroumova and kept a friendly relationship with her. They were both members of the association “World of Art”.

Anna Petrovna Ostroumova (married name: Ostroumova-Lebedeva; 1871–1955), artist, painter and graphic artist. She studied at the School of Technical Drawing and then at the Imperial Academy of Arts under Ilya Repin from 1892 until 1900. She worked in the studio of James Whistler from 1898 until 1899. She was a member of the World of Art union, a People’s Artist of the RSFSR (1946) and a full member of the Academy of Arts (1949). The main theme of her work was St Petersburg, and she dedicated several decades of unstinting labour to its depiction. She wrote the book “Autobiographical Notes”.

Konstantin Somov’s portrait of Anna Ostroumova was the result of long and arduous work. The sitter later recalled: “Somov spent a very long time painting me – seventy-three sittings sometimes lasting up to four hours … He began to paint my face in small sections, which were immediately finished. Begining with my forehead, which he took several sittings to paint, he descended to the eyebrows, where he also worked for a long time, then one eye, then the other, etc. I remember that he required five sittings to paint my mouth. When he had finished my chin, i.e. the whole face, he did not return to what had already been painted … the portrait was both like and unlike me. The facial features, the posture, the incline of the head and the hand dangling on the arm of the chair – all that is me. At the same time, I can discern much that is Somov’s shining through and even dominating the portrait. Most importantly, there are several features which are not typical of me. Somov depicts some dreamy, sorrowful figure. Though occasionally subject to fits of melancholy, I was active, energetic and at times a great jester.” Elements of stylisation and refinement can be seen in Somov’s scrupulous painting technique, similar to that of the Old Masters, and the elegant combination of black, grey and violet tones.