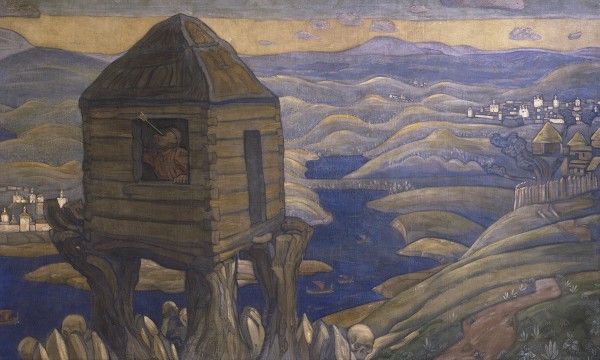 Nightingale the Robber was a negative character in Eastern Slav mythology and folk epics. He would perch on a tree by a road and stun anyone passing by with his terrible whistle. He could not be defeated until, according to one version of the story, the bogatyr Ilya Muromets blinded him with his sharp spear.

In 1909-1910 Roerich performed the series of panels "Bogatyr frieze" for the mansion of Philadelph (Philipp) Bazhanov, the prominent industrialist and honorable citizen of Saint- Petersburg. The house was built by the architect Pavel Aleshin in 1907-1908 in the Art Nouveau style. Unique design was characteristic of every interior he created, but the theme of heroic Ancient Rus was the dominant one. The living room was decorated with majolica fireplace "Volga and Mikula", made according to the sketch of Mikhail Vrubel. The Roerich's panel was located in the dining room. The series consisted of eight narratives (“Sadko”, “Knight”,”Boyan (Bard)”, “Ilya Muromets”, “Mikula Selyaninovich”, “Hill Fort”, “Volga Svyatoslavovich”, “Nightingale the Robber”) and eleven decorative compositions. The creation of the monumental "Bogatyr frieze" became the culmination of Roerich’s appeal to the epic topic in his work.