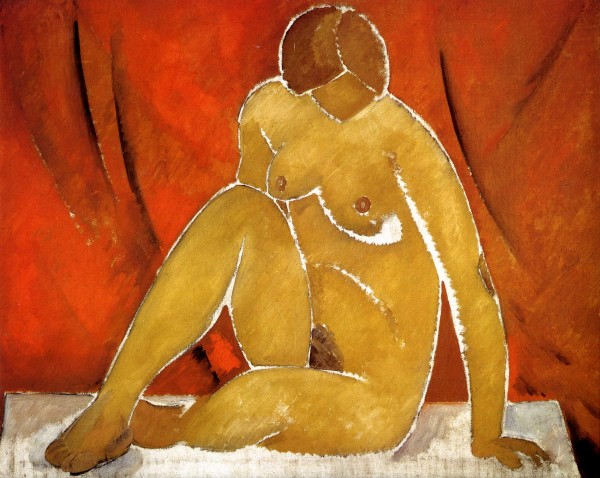 In 1912, following his break with Mikhail Larionov and his group, Vladimir Tatlin opened his own studio on Ostozhenka in Moscow, where he and a group of followers painted nude models. Tatlin’s large paintings were influenced by the works of Pablo Picasso, which the Russian artist could see in the private collections of Sergei Schukin and Ivan Morozov and at exhibitions of modern French painting in Moscow. Seeking his own form of Cubism, Tatlin borrowed liberally from the traditions of Old Russian icon-painting.
Artist’s Model reflects his tendency towards generalisation, synthesis and the plastic significance of form. The large colour planes, the role of the silhouette and the simplified contour of the figure add expressiveness to the artistic quests. The rhythmic and constructive forms and the laconic tones are justified in respect to the correlations of the masses and the patches of colour. Opening new doors in art, Tatlin successfully combined the expressive plastics of Old Russian icon-painting and Cubism.