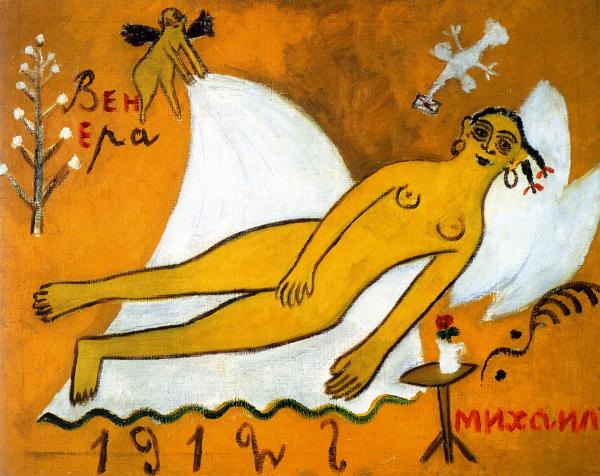 Mikhail Larionov painted Venus in 1912, when he was working in parallel on lithographic books, applying deliberately archaic, “homemade” stylistic devices and addressing the expressive possibilities of handwriting. Like his paintings of this period — the unfinished Venus series and the Seasons cycle — the artist creates something akin to an “instantaneous stroke of the pen”. Larionov was interested in such diverse manifestations of folk creativity as the art of ancient cultures, children’s drawings and graffiti. Rebelling against “Greco-Roman sanctimoniousness”, he painted his very own series of Venuses. While this particular Venus lies in a classical pose, the element of amour introduces a note of parody. Other associations, however, link the work to primeval images. The painting represents a simplified and generalized drawing; it is virtually a symbol.