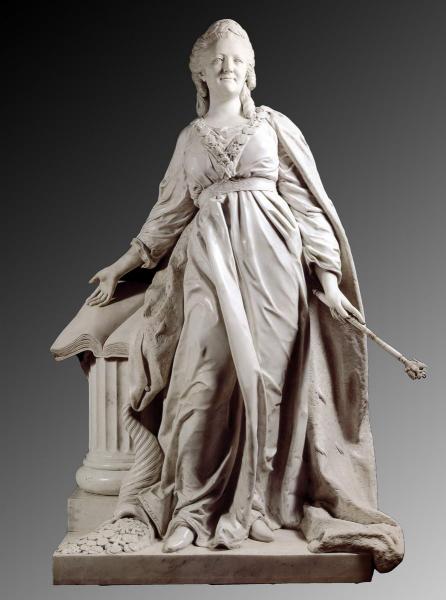 This sculpture is an allegoric and an official portrait of Empress Catherine the Great. This sculpture of the Empress has an important place in Shubin’s work. This statue “Catherine the Legislatress” was created for a celebration organised by Grigory Potemkin in honour of the Empress at the Tauride Palace. A special rotunda was built in the Winter Garden for this statue. The white marble statue stands on a porphyry pedestal and is surrounded by greenery and gleamed by flickering candles. The appearance of the Empress, depicted wearing a tiara of laurel on her head, a chain on her chest and the Royal sceptre, is a combination of a ceremonial portrait and her individual features. The loose tunic and an ermine mantle does not conceal the proportions of the figure of the ageing woman. Shubin remained faithful to his realistic interpretation when he painted the ceremonial appearance of the Empress. For this work the sculptor was awarded the title of Professor in 1794.