Painter, portraitist. In 1812 he graduated from G.I. Ugryumov’s class of historical painting at the Academy of Arts with the diploma of the 1st degree and the title of artist of the 14th class. During his training he received the following medals: the second and the first silver (for drawings from nature in 1809 and 1810), and the second and the first gold for the execution of programs “A Generous Deed of Tsar Ivan Vasilievich" (1811) and "The Citizen of Nizhny Novgorod Kozma Minin Persuades of the Citizens to Donate All Their Property for the Salvation of the Fatherland" (1812). Remained at the Academy of Arts as a scholar until 1817.

Received the title of academician in 1820 for the excellent portrait of the rector of sculpture I. P. Martos, which was included in the collection of portraits of members of the Academy of Arts and was transferred to the Russian Museum in 1923. For the public hall of the Saint Petersburg Board of Trustees Antonelli made four portraits: those of Catherine II, Nicholas I and empresses Alexandra Fyodorovna and Maria Fyodorovna. In addition to portrait painting, he performed images of saints for churches. He painted icons for the iconostasis of the Church of the descent of the Holy Spirit at the Alexander Nevsky Lavra – "Crucifixion", or "The Savior Who Died on the Cross" and "Ecce Homo" (a copy of Guido Reni), and the image of the four evangelists in the pendentives of the St. Paul's Church at the Alexander manufacture. 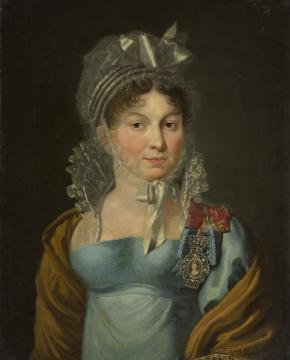