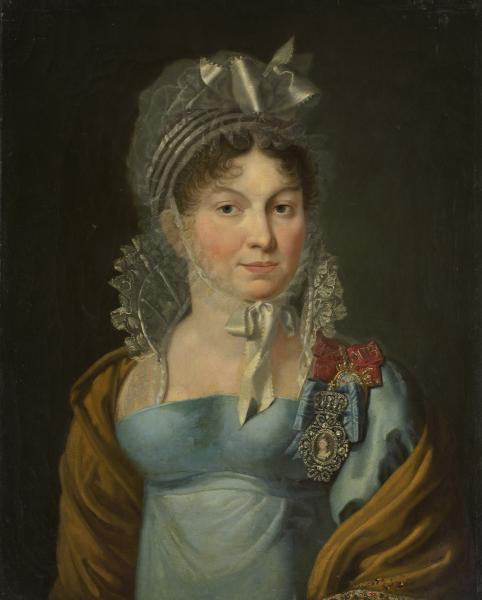 The countess Praskovya Vasilyevna Musina-Pushkina (née Dolgorukova; 1754–1826) since the beginning of the 1770s was the wife of General-in-chief, later Field Marshal, Valentin

Platonovich Musin-Pushkin (1735–1804). Immediately after the enthronement of Paul I in November of 1796 she was the first to become a lady-in-waiting, and at the coronation of the Emperor in April 1797 she received the order of St. Catherine. She is pictured with the order of St. Catherine of the Lesser cross and the sign of the lady-in-waiting — a miniature portrait of the Empress Maria Fyodorovna on a blue ribbon. By all accounts, in her youth she was very pretty and distinguished by her courtesy. In the high society she was feared for her powerful and courageous character. She had only one son, Vasily, and to increase his already vast fortune, she married him to her niece, the rich heiress and the last countess Ekaterina Yakovlevna Bruce, and asked Paul I to permit her son to add the name "Bruce" to his family name. They lived separatedly. Vasily Musin-Pushkin was close to the literary and theatrical circles and knew A. S. Pushkin well. He had three natural daughters with the actress Nymphadora Semyonovna Semenova (1788–1876), who was his mistress for many years.

After her husband's death Praskovya Vasilievna built in the Moscow Simonov monastery where he was buried the Church in the name of the Holy Martyr Valentine and also donated 20000 roubles to the monastery.