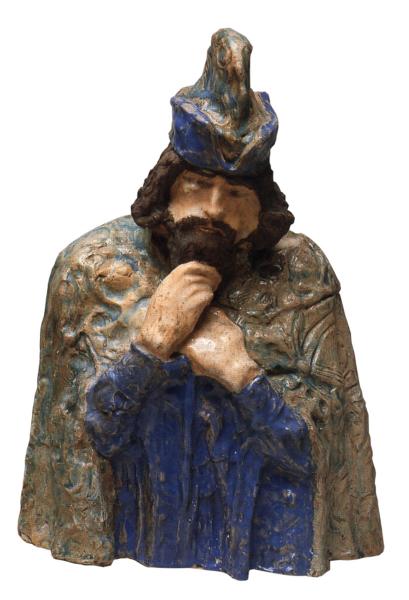 The work in the Abramtsevo Pottery Workshop fascinated Vrubel with the idea of revival of national art and creation of a new Russian style. The foundation of Vrubel’s subjects are folktales, legends, songs and folklore images.

The wise tsar of the land of the Berendeyans from the fairy tale “Snow Maiden” by Alexander Ostrovsky is one the favourite images of the artist. The sorrowful death of the Snow Maiden and the awful death of her beloved Mizgir (he drowned himself in the lake) are sacrifices that makes the anger of Yarilo fade and the mythological Berendeyans would be rewarded with a happy life. The artist depicted Tsar Berendey in that moment when he took an uneasy but the only one right decision in his mind. Art historians suggest that the fairy-tale character bears some resemblance to the composer, the author of the opera “Snow Maiden”, Nikolay Rimsky-Korsakov with whom the artist was very friendly. “Tsar Berendey” was exhibited at all expositions of Vrubel’s majolica works starting from the exhibition “World of Art” in 1900.