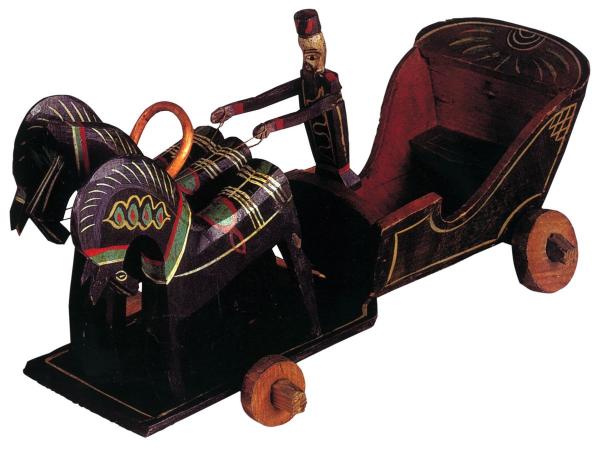 From the second half of 19th century in the Purekh village and the Kurtsevo village in the Gorodetsky district, among the toys powerful horses with beautiful manes harnessed to carriages appeared. "The harness" was single, pair and "Troikas" (a carriage with three horses). Gorodetsky’s horses in harnesses are an example of group compositions in folk plastic. Although each figure itself is rather flat, together they are modeled vigorously.

Figurines were assembled on plank stands with the expectation that one figurine would not obscure the next one, no matter, how many there are. The Gorodetsky harnesses were painted in red, black and purple colours. The pattern and a floral ornament which is close to the famous roses of the Gorodetsky painting on the distaff’s bottoms were drawn on painted surface.   In addition to the harnesses, carriages for dolls, cots, horses, birds, dolls and painted chairs for children were made.