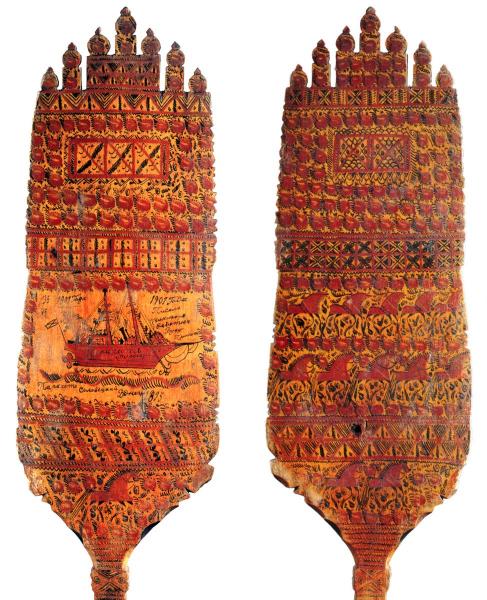 The Mezen district, the Archangelsk Province. 1901

The Mezen painting combines antiquity and the present-day. The echoes of the ancient geometrical style is revealed in the austere set of colours, patterns and clear division of the decoration in the rows. One can suggest that the painting came to replace carving having kept its drawing and composition. At the same time the character of painting, quick strokes and flourishes of black paint, brown stripes and spots, sketchy depictions of horses, deer and birds – all these features tell about methods of shorthand that has been formed in the craft. Palachelie became the centre of the craft. Since the mid-19th century the ladles, spoons, baskets and distaffs had been painted there. Whole families were engaged in painting during long severe winters. The painted pieces were brought by carts to the fairs and markets. They were spread over the whole Northern region. One could find the Mezen distaffs over the vast spaces from the Pechora River in the east to the Onega Lake in the west.

The distaff is the main object in which the art of Mezen painting showed itself most fully. The pattern locates on the face side of the distaff’s blade row by row. On the top there are depictions of birds. Deer and horses are painted below, among the rows of the geometrical patterns. The wave-shaped rhythm of running animals co-ordinates with the rhythms of geometrical patterns dating back to the old geometrical style in carving on wood, knitting, weaving, to the traditions of neighbouring komi and nenets. The antiquity of origin also marks the technique - drawing by stick and split bird’s feather straight on wood in soot, red clay or red ochre. The painting was fixed by linseed oil.