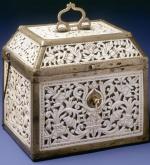 The “terem” form of the casket, reminiscent of a house with sloped edges of the roof, is a characteristic of Russian utensils of the 17th-18th centuries and is found not only in bone and wood carving, but also in wrought iron. A lush herbal ornament, which is the style characteristic of the art of the epoch, adorns the casket with openwork carvings.

The villages on Kurostrov near Kholmogory of the Arkhangelsk province were known for the bone carving craft as early as in the 16th century. The production of walrus tusks was the original craft of the Pomors and the inhabitants of the northern rivers of Pinega, Mezen, Pechora. The beast was beaten near Vaygach Island and off the coast of Novaya Zemlya. In the tundra people obtained a "blue" fossil bone that is the tusk of mammoths, valued along with the fangs of walruses. But more simple items craftsmen cut from the bones of domesticated animals. The earliest works of Kholmogory carvers are preserved in the collection of the State Russian Museum and date back to the end of the 17th century. The lush herbal pattern is characteristic for bone objects, as well as for the whole style of art of this era.