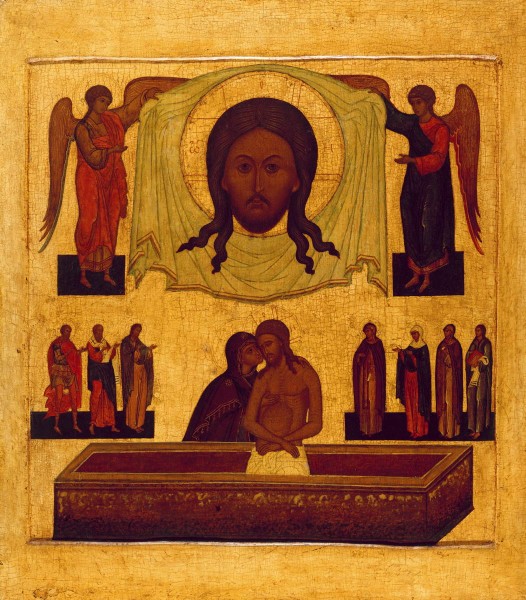 “Do Not Cry for Me, Mother”, Saviour Not-Made-By-Hands and Saints

Such compositions were popular in sixteenth and seventeenth century Russian art. The scene does not correspond to any canonical text. The dead figure of Christ indicates his real death, yet it is depicted vertically and is not nailed to the cross. A special feature of this particular work is the representation of the commissioner''''s patron saints at the edge of the central image. The unusually extended form of the large coffin also underlines the fact that this icon was commissioned in memory of the dead. The image of the Virgin Mary on the icon, in which she is not merely standing by the dead body of Christ, like in the scenes of The Crucifixion, but where she is embracing him, like in The Entombment, has a special significance. In Rus, icons with such an image were carried in a solemn procession, accompanied by the troparion "Behold, the Bridegroom Comes at Midnight", and each believer would kiss the icon. The Virgin Mary, as the embodiment of the Church, embraces Christ and merges with him, identifying with his sacrifice. The image of the Mother of God embracing her Son symbolises the love of the church and Christ. The bridegroom washes the bride in his blood and prepares her for the wedding feast of the Lamb. The sepulchre also symbolises the wedding bed of the King and the Queen and the wedding feast to which all believers are invited. The patron saints depicted above the tomb pray constantly to God for the souls of their protégés, becoming the eternal participants of the Eucharist of the Lord.