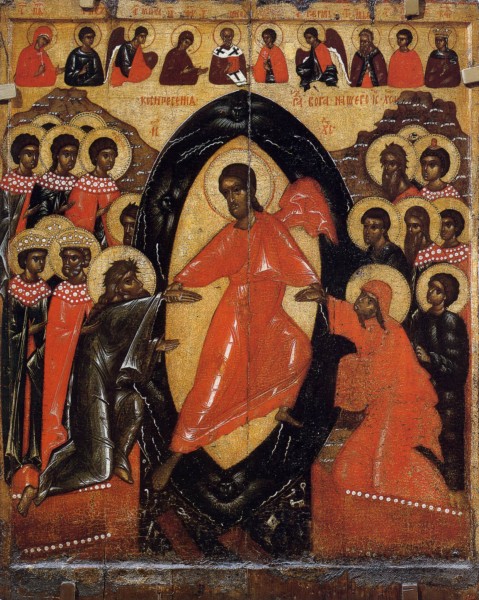 The Resurrection and Descent into Limbo

The iconography of the scene is based on the apocryphal Gospel of St Nicodemus, liturgical texts, psalms, Old Testament prophecies, St Peter’s Epistles and patristic compositions. St Epiphanius of Constantia and St Eusebius of Alexandria’s Descent of Jesus Christ into Hell tell how Christ descended into the abyss after the Resurrection. He overthrew Satan and liberated the righteous, erasing the original sin of Adam and Eve with His blood.
The main idea of the Resurrection (Greek: Anastasis) is the celebration of Christ’s victory over hell and death. This concept is united in the icon with the theme of suffering and sorrow and trepidation before the inscrutable mystery of the Resurrection. The Resurrection of Christ was a particularly popular theme in the Pskov school of icon-painting, which developed its own unique version of the subject, quite unlike Byzantine or Old Russian iconography.