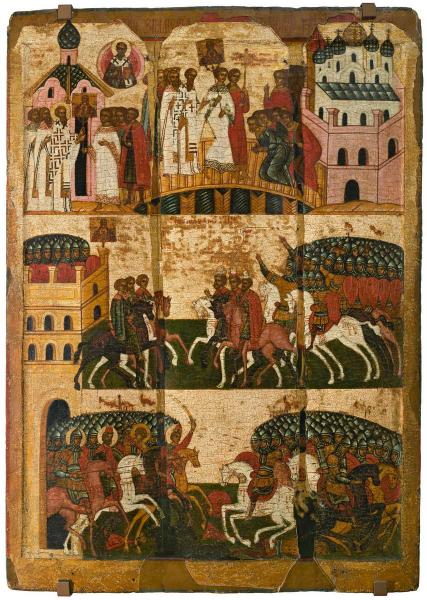 The icon consists of a waist-length image of the Virgin Mary, her hands raised upwards, with a medallion on her breast depicting the Infant Christ. Jesus’ right hand is raised in blessing; He holds a rolled-up scroll in his left hand. Icons of this type were known in Greece as Oranta (“praying”) or Panagia (“allholy”). When it reached Russia, the image acquired the name of the Mother of God of the Holy Sign (Znamenie).

Icons of the Mother of God of the Holy Sign were popular in Novgorod in the twelfth century, when one allegedly saved the besieged city from an invasion by the Suzdalites. When Archbishop Elijah of Novgorod was praying, he heard a voice commanding him to take the image of the Virgin — the town’s patroness — from the Church of the Transfiguration of the Saviour and hang it on the city wall. During the procession, an enemy arrow struck the icon. The Virgin turned her face towards the city, giving a sign to the people of Novgorod. The Suzdal regiments were blinded and fled in terror. Following this miraculous sign, the archbishop established an official Russian Orthodox holiday in honour of the Mother of God of the Holy Sign.