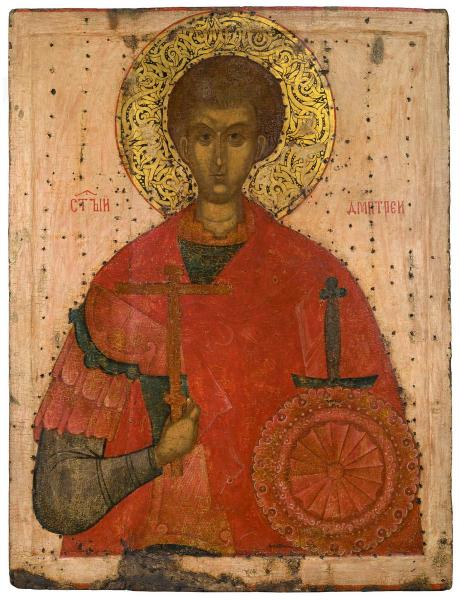 Proconsul of Thessalonika in the fourth century, St Demetrios of Soluneia was put to death for preaching Christianity in the Roman town of Sirmium in the northern Balkans. His feast-day is celebrated on 26 October. St Demetrios ranks alongside St George of Cappadocia as one of the most popular holy warriors in Orthodoxy. The epitome of heroism on the field of battle, he is the patron saint of soldiers in Russia. In the fourteenth century, the Russian Orthodox Church even established a special religious festival of St Demetrios in commemoration of those who died at the Battle of Kulikovo in 1380.

The image of St Demetrios of Soluneia evolved in the fourteenth century, when the courageous warrior and defender grew more contemplative and self-immersed. Although the aristocratic appearance of the saint in this particular icon is unusual, many other features are typical of Pskov art — the combination of cinnabar, green and earthy tones, the gold assist on the clothes, the facial painting, the dark grey-olive undercoat and the bleached ochre cheeks. The tension on the subject’s face date from the preceding period of psychological expression in the history of the school.