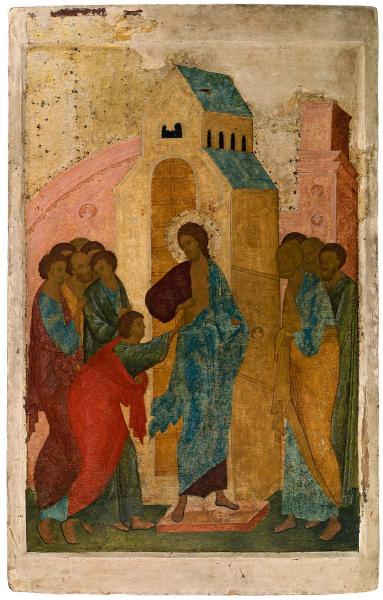 The Incredulity of Thomas

Dionysius was one of the most famous Old Russian artists. His oeuvre reflected the spiritual and artistic searches of the fifteenth century and dictated the main trends in the Russian painting of the second half of the fifteenth and early sixteenth centuries.
This particular work comes from the St Paul of Obnorsk Monastery, a religious retreat established in the north of Vologda Province not far from the St Ferapont Monastery. The subject of the icon is based on the Gospel story of Doubting Thomas and was included in the festival row of the iconostasis. The Russian Orthodox Church marks the Incredulity of Thomas in the second week of Easter, which is also known as the Week of Thomas. Throughout this week, the Resurrection of Christ is lauded in hymns confirming the verity of His divinity and humanity. The icon depicts Thomas reaching out to touch Christ’s wounds, in order to corroborate His Resurrection. Thomas’ gesture and pose reflect his reverence, fear and ecstasy. His hand reaches out to touch Christ’s hand and the silhouette of his back seems to continue the line of Christ’s bent arm. Thomas is thus simultaneously under Christ’s arm, under His merciful and understanding gaze and under His power. Thomas’s pose is his confession: “My Lord and my God!” (John 20: 28).