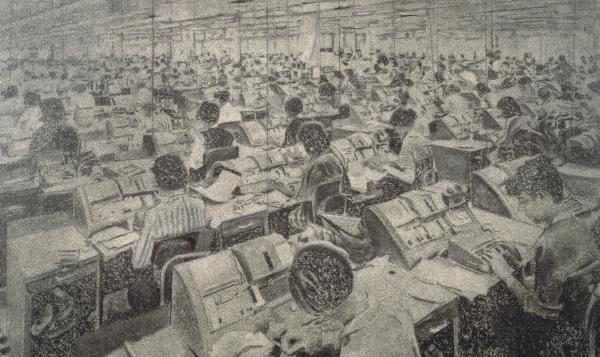 After using a linear grid to  transfer a photograph to hardboard, the artist applied a thin layer of black and white paint to evoke the aesthetic effect of the homogeneous grain of photographs printed in newspapers.

Richard Artschwager's paintings of this period convey a critical mood, their monochrome grey suggesting the anonymity of big-city life or - as here - the wearisome daily round of work in enormous impersonal offices, whose atmosphere can only be described as chilling.

A waiver of any form of individual touch, an avoidance of conventional composition, and a translation of photographic originals into simulations of photographs, are the salient traits of the photorealistic painting which succeeded pop art in the 1970s. Yet unlike such artists as Ralph Goings, instead of emphasizing photographic focus taken to the point of hyperrealist super-sharpness, Artschwager preferred a minimalistic, abstracting approach. His prime concern was with the issue of a geometric condensation of space and structuring of the painting surface.