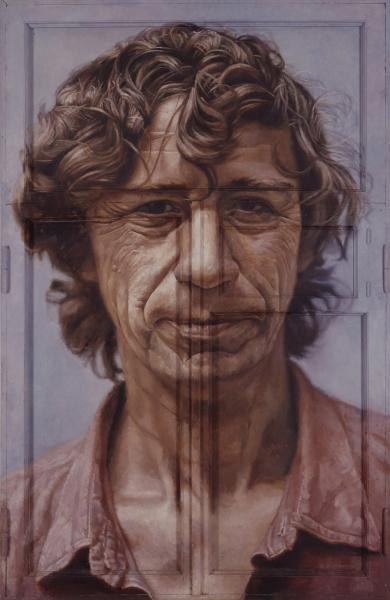 The central part of a three-part composition. 1981

Makarevich belongs to the group of artists known as the Muscovite conceptualists. Most of his works use as a central theme questions on the  heory of art.

Chuikov's portrait thus appears on a wooden window, at the same time the framework in relief stands out as a result of the portrait: Čujkov himself frequently uses objects e.g. windows. Il'ja Kabakov's portrait installed in a cupboard is an allusion to Kabakov's installations which often have a documentary character in so far as they reflect life in the Soviet Union. Bulatov's portrait is detached, assembled in front of a box: Bulatov frequently works with the confrontation of picture and text by adding written characters to extremely spatial-depth oriented paintings, thus counteracting the depth effect of the  picture with the flat element.