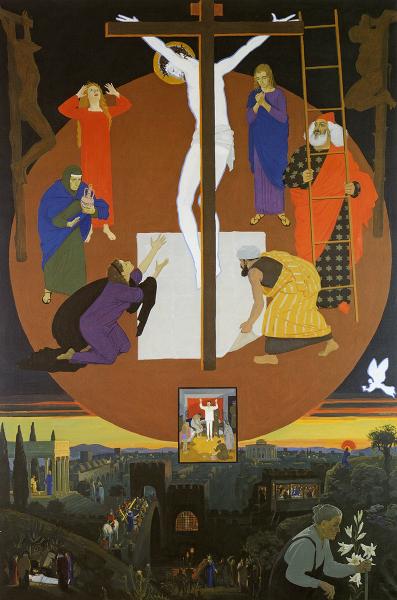 On contrary to the tradition of the crucifixion scene, it is a backview of Christ which is shown here; in the lower third of the picture are scenes from the Passion of Christ. The image structure of the main scene in the upper part and the narrative secondary scenes stems from the traditional medieval altarpiece.

At the foot of the cross is a small picture within a picture, a miniature of Žilinskij's painting 1937, produced five years earlier, portraying his father's arrest at the time of Stalinist terror. In this painting Žilinskij has drawn a distinct parallel in image structuring and statement between his father's fate and the Passion of Christ. Members of Žilinskij's family portrayed in the earlier painting can also be found in the picture Dios con nosotros  (God with Us) which was produced in Spain.

The painting has confessional character. Žilinskij, who was baptized during the Breznev era, again links the sufferings of Christ and the faith in the resurrection connected to this with the tragedy of his own family history. The picture stands for the persecution, arrest and violent death of many people who were not in conformity with the system. By means of the personal element the religious topic becomes the symbol of human suffering and misfortune but also of hope.