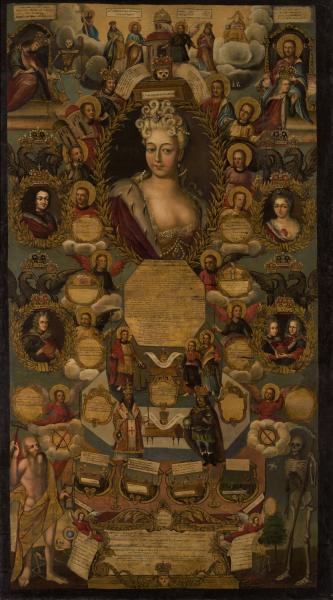 Natalia Alexeyevna (August 22, 1673 – June 18, 1716) – favorite sister of Peter the Great, Tsarevna; daughter of Tsar Alexis I Mikhailovich and his second wife Natalia Naryshkina. After Tsatitsa Eudoxia Lopukhina, Peter’s first wife, was made to take the veil in 1698, Peter’s son the young Tsarevich Alexis stayed with Tsarevna Natalila in the village of Preobrazhenskoye. Peter later also sent Marta Skowrońska (baptized as Catherine with Tsarevich Alexis becoming her godfather) to stay with Natalia. Two sisters of Alexander Menshikov also stayed at the court of the tsarevna. Starting from 1708 Natalia lived in St Petersburg.

The picture was painted following the tsarevna’s death. The painting is composed as a “conclusion:” the picture includes portraits, scenes, allegorical figures, and texts from the Bible. Usually “conclusions” were engraved; this picture is a rare example of the genre being a painting that has no engraved analogues. It is an epitaph of a kind with the tsarevna’s portrait placed in its centre. The “conclusion” was given to Peter the Great by Afanasy Zarutsky, Protopope of the Novgorod-Seversky Cathedral. The painting was probably created in the year of Natalia Alexeyevna’s death, or a year after that (before an investigation into the case of Tsarevich Alexis, whose figure wearing a suit of armor is included in the composition).