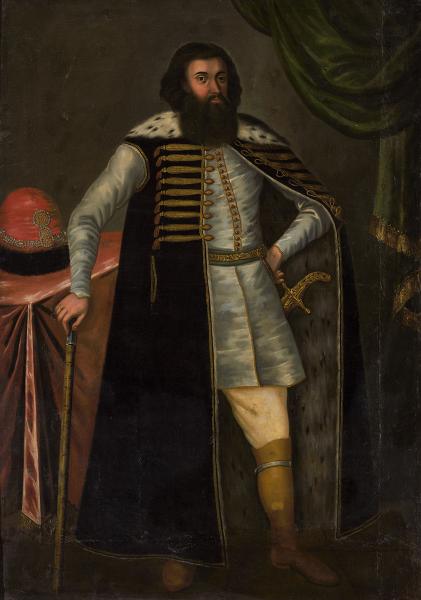 Anikita Repnin (1668 – July 3, 1726). Middle son of Ivan Repnin (1615– 1697) who was a boyar close to the tsar and a house steward of Tsar Alexis Mikhailovich, and Ivan’s wife Yevdokia Nikiforovna Pleshcheyeva (? – April 8, 1695). Russian Field Marshal General (1725). From his early years Anikita was close to Peter the Great and took part in the creation of the emperor’s Toy Army. In 1685 he became Lieutenant and within two years he was promoted to Colonel. Repnin participated in the Azov campaigns of 1695–1696. In 1696 he commanded a frigate. In 1699 he became Major General. In the beginning of the Northern War he commanded a division. Following the order of Peter the Great he reconstituted Russian forces withdrawing from Narva after they were defeated in 1700. He took part in the Siege of Nöteborg (1702) and Narva (1704). During the Battle of Poltava (1709) he commanded the centre of the Russian troops. During the years 1709–1710 he commanded the siege and the seizure of Riga. During the years 1712–1713 and 1715–1716 he commanded troops in Pomerania. In 1719 he was appointed Governor General of Livonia, and at the same time he acted as President of the Military College from 1724–1725. After the death of Peter the Great, he supported the enthronement of Catherine I, but shortly afterwards Alexander Menshikov sent him away to Riga.

From the second half of the 19th century to the early 21st century almost all scholars believed the person depicted here to be Ivan Borisovich Repnin; however, this traditional view was recently reconsidered. In 2014 a new version was accepted by the Attribution Council of the Russian Museum.