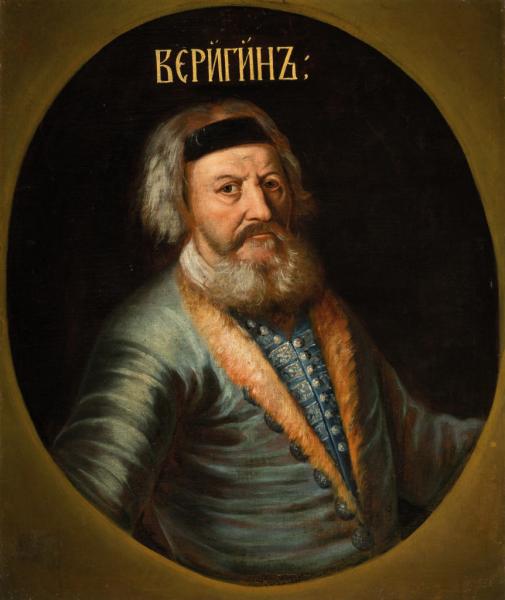 Fyodor Verigin (dates unknown). He was a stolnik (cupbearer) for Tsar Alexei Mikhailovich from 1658, and also for Peter the Great until 1692. He was one of the members of the Drunken Synod. His daughter Maria was married to Vasily Dolgoruky, and his grandson was married to A.V. Sheremeteva.

The picture was first published in the anthology Art Treasures of Russia in 1903, but the name and patronymic of the person depicted were not mentioned. In the 1973 exhibition catalogue, the subject is mentioned as Fyodor Ivanovich. It has been established that Verigin was Peter’s stolnik (cupbearer) in 1692. One can assume that Verigin's portrait, like all portraiture of bearded characters in the Preobrazhensky Series, must have been painted before August 30, 1698; when Peter the Great returned from aboard and forced all boyars and his inner circle to shave their beards.