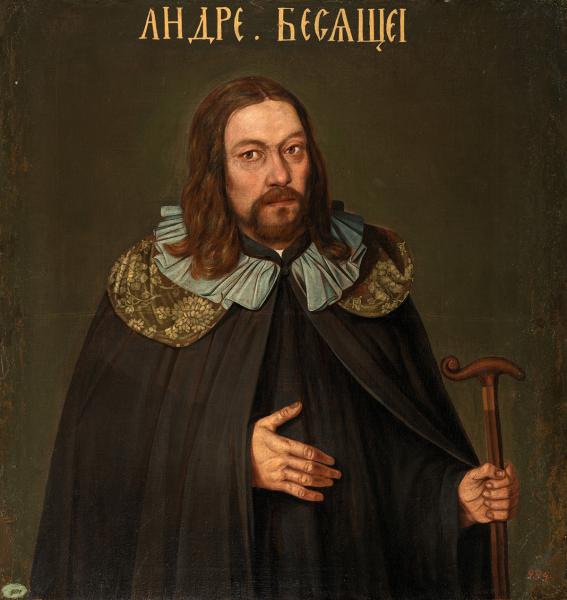 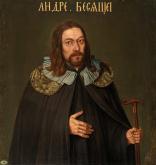 Andrei Matveyevich Apraksin (1663–1731). Brother of Tsaritsa Marfa Matveyevna, General-Admiral Fyodor Matveyevich Apraksin, and Peter Matveyevich Apraksin, a senator. Stolnik (cupbearer) of Tsar Ioann V Alexeyevich. Member of the College of Cardinals of the Drunken Synod with the nickname “Besyashchy (Maddening) Andrei”. In 1728 he was awarded the title of Count and made chief cupbearer. In 1728 he became Major General. Author of the text published as the Notebook of Curious Accounts of the Grand Person who Travelled Incognito under the Name of a Russian nobleman with the Russian Embassy in 1697 and 1698.

The earliest reference to the portrait is from the Inventory of 1735; according to which, “the personage of Andrei Besyashchy” was placed in the entrance hall. The subject of the paining, Apraksin, received his nickname “Besyashchy” (“Madenning”) after Stolnik (Cupbearer) Vasily Zhelyabuzhsky and his son, reported Apraksin’s thuggish behavior to the tsar; after Peter the Great “marched” on the Trinity Lavra of St. Sergius on October 8. 1696.