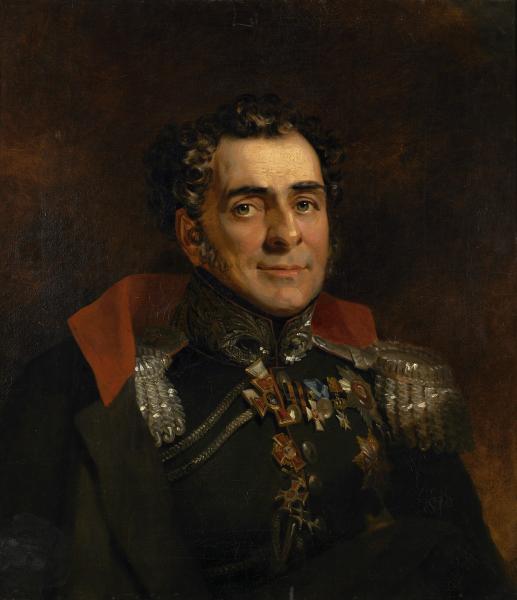 Dmitry Dmitrievich Kuruta (1770–1833), a migrant from Greece, served Russia from 1787. He took part in the campaigns of 1805 and 1806–1807. In 1812 he was made senior Quartermaster of the College of Guards. In 1816 he became lieutenant general, Chief of Staff of the Polish forces, Marshall at the Court of the Grand Duke Konstantin Pavlovich in Warsaw and in 1828 an Infantry general. In 1826 he was elevated to the level of Count. He is depicted here in his quartermaster’s uniform with the Orders of St Alexander Nevsky (star), of St Vladimir of the 2nd class (star and cross on the neck), of St Anne of the 1st class (cross with diamonds), of the White Eagle (star), of Leopold of the 2nd class (Austria, cross), of Maximilian Josef (Bavaria, cross) and the Kulm Cross (Prussia). On the mounting are the Order of St George of the 4th class, the medal “In Memory of the Patriotic War of 1812” (silver, on St Andrew’s ribbon) and the Order of St John of Jerusalem (the Maltese Cross). An identical (unsigned) copy which was completed “before 1825” can be found in the Military Gallery of the Winter Palace.