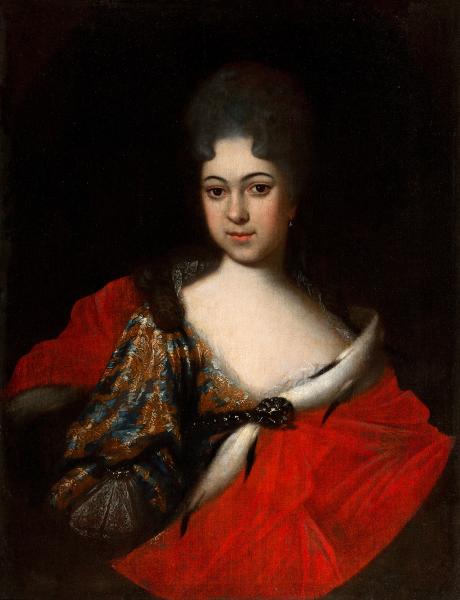 Portrait of the Tsarevna Praskovia Ivanovna

Praskovia Ioannovna (September 24, 1694 – October 8, 1731). Tsarevna, younger daughter of Tsar Ioann V Alexeyevich, and the sister of Catherine Ioannovna and Anna Ioannovna. After her mother’s death in 1723, she married General in Chief Ivan Dmitriev-Mamonov (December 10, 1680–May 24, 1730) with the consent of Peter the Great (according to other sources – secretly). In October, 1724 they had a son who died around 1730.

The Academy acquired this portrait no later than the middle of the year 1773. Subsequently, it left the academic collection. It was exhibited within the Tauride Exhibition of 1905 as a portrait of Anna Petrovna (?) painted by Tannauer (?). When part of the Oliv family collection the portrait was counted as an unknown work by Ivan Nikitin. The theory that the person depicted is actually Praskovia Ivanovna was suggested in the Guideline Catalogue of the Russian Museum published in 1948. Thereafter the attribution has never been challenged.