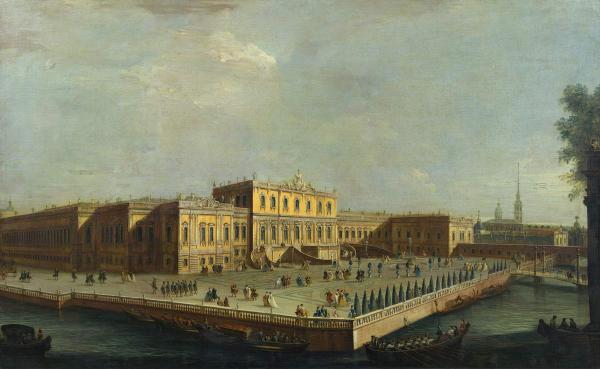 The Summer Palace has not been preserved to nowadays. It was built by Francesco Bartolomeo Rastrelli in 1741-1744 at the site where St Michael’s Castle (Engineers Castle) is located at present.

In the beginning of 1740s Francesco Bartolomeo Rastrelli launched the building of the Summer Palace in the Third Summer Garden for tzarina Anna Leopoldovna. However, while the building was being constructed, a palace coup happened and it was Elizabeth Petrovna who became the owner of the palace. There were more than 160 suites including a church, hall and galleries. All the rooms were decorated by the mirrors and sculpture. The decorative park with the enormous complicated maze, bosquets, gazebos and two trapezium ponds was laid out in the surrounding area.

Elizabeth Petrovna liked the Summer Palace very much. In the end of April or beginning of May (as the weather allowed) the official move of the Empress from the winter residence took place. It was accompanied by the magnificent ceremony with the participation of the court, orchestra, Guards regiments and gun salute. When the tsarina returned to the Winter Palace in the late September the same ceremonies occurred.

The future Emperor Paul I was born in the palace on 20 September 1754. In the throne room Catherine II received the greetings from the foreign ambassadors on occasions of the accession to the throne. However, as time went by, Elizabeth Petrovna started to prefer the other summer residences and the Tsarskoe Selo especially. The building had been dilapidated with time. First, it was given to Grigory Orlov and then Grigory Potemkin. In February 1796 the Palace of Elizabeth Petrovna because of being dilapidated was demolished and one started constructing the new imperial residence.