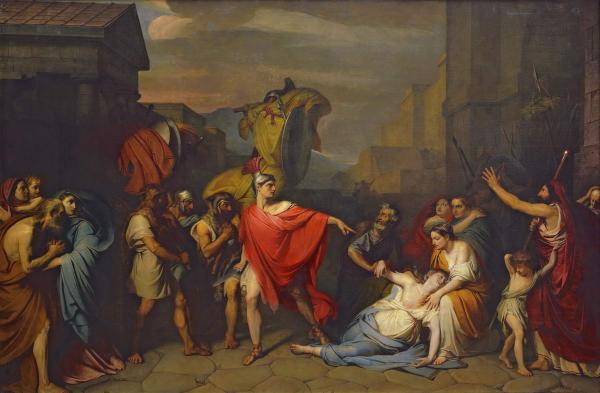 Death of Camilla, Sister of Horatius

23-year-old Fyodor Bruni took this subject from the legendary past when Rome was at war with the city of Alba Longa. The fate of this longstanding feud was to be determined in the fight between the three brothers Horatii – from the side of Rome, and three brothers Curiatii – from Alba Longa. Returning to Rome, the victorious survivor Horatius sees his sister Camilla mourning the death of her fiancé, one of Curiatii, instead of her brothers’. Enraged, her brother strikes her with his sword. The act of the hero is met by part of the witnesses with horror and compassion for his victim.

These emotions are also communicated to the audience; and it is no coincidence that F. A. Bruni’s painting, initially named by the author “Triumph of Horatius”, was renamed by his contemporaries to "The Death of Camilla, Sister of Horatius".

But here, like in no other Russian historical painting, the triumph of community spirit and determination to sacrifice their personal and most precious everything for the public debt is immortalized. In a strong imperative gesture of Horace, in mimics of other characters, in colour scheme, a drama so intense is expressed, as could not be found in previous works by the Russian historical painters.

The action of this painting unfolds before us like a classical frieze: the plastic of figures placed on the stage is carefully modelled, their gestures are majestic, large folds of the draperies fall nobly. A scarlet cloak and a striking pose lay emphasis on the hero placed in the centre – his pointing hand is exactly congruent with the diagonal composition. The painting’s clear classic scheme echoes J. L. David's painting "Oath of the Horatii" (1784, Louvre).

The painting was given to the Russian Museum in 1897 from the Museum of the Academy of Arts; earlier (from 1824 to 1833) it was stored in the estate of the Prince Baryatinsky; in 1833 it was exhibited and in 1834 purchased by the Imperial Academy of Arts.