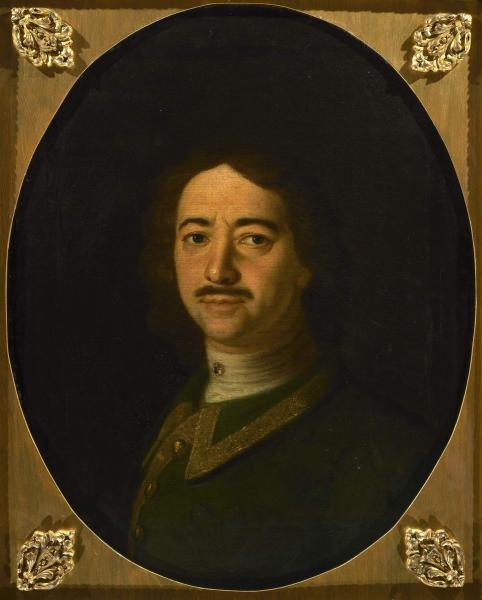 Emperor is depicted in uniform of artillery company of Life Guards of Preobrazhensky regiment. In Cat. 1980 – Nikitin I.N. (?). Portrait was located in the Catherine Palace in Tsarskoye Selo. In 1773 Catherine II gave it to the sculptor E.M. Falconet for the work on the monument of Peter I. Leaving for the Hague Falconet took the portrait with him. After his death in Paris in 1791 it was passed to his daughter in law Marie-Anne Collot (Marimont estate near Nancy, France), and then – to her daughter, the Baroness Jankovich. In 1866, under the will of the Baroness Jankovich the portrait was transferred to the Gatchina Palace. In 1925 it was moved to the Russian Museum (Weinberg, 1971, p. 229–237).

In the Gatchina Palace in the second half of the 19th century the portrait has been attributed to Caravaque (?) (Weinberg, 1971) or Nikitin (Rovinskii. Portraits, Vol. 4, col 279), in the Russian Museum – to Nikitin. N.M. Moleva and E.M. Belyutin considered the portrait to be the indisputable work of Ivan Nikitin and associated it with the recording about the artist’s work on the portrait of Peter I in 1721 "on Kotlin Island" (Moleva, Belyutin 1965, pp. 45–47).

A.L. Weinberg considered that this portrait is the work of L. Caravaque on the basis of painting style and iconographic similarities of Peter I with engraving made by P. Soubeyrand (1743) from the original work of Caravaque (1723). Weinberg assumed that this is the very portrait that Caravaque painted from Peter I in 1722 in Astrakhan (Weinberg, 1971). S.V. Rimskaya-Korsakova also confirms the authorship of L. Caravaque on the basis of technological analysis.