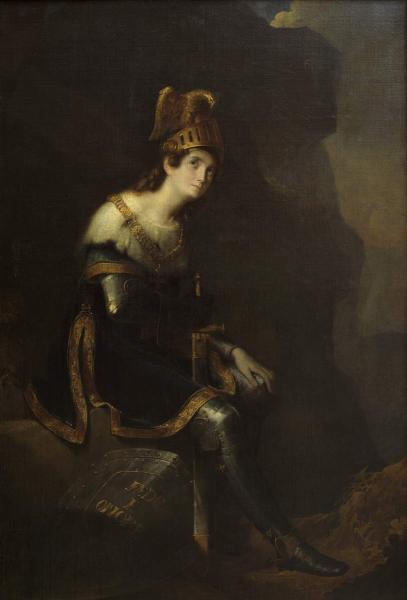 Portrait of the Writer and Musician Princess Zinaida Alexandrovna Volkonskaya, née Princess Beloselskaya-Belozerskaya (1879–1862), Dressed as Tancred (from the Opera by G. Rossini)

Zinaida Alexandrovna Volkonskaya, née princess Beloselskaya-Belozerskaya (1789–1862), Wife of the Master of the Hunt Prince Nikita Volkonsky — writer, musician, member of the Society of Lovers of Literature and the Society of Lovers of History and Antiquities. Since 1824 lived in Moscow; her house was a meeting place for famous scientists and writers. In 1829 she moved to Rome, where she converted to Catholicism and after her death was beatified (beata). A lithographic portrait of Z. A. Volkonskaya as Joan of Arc (the variant of the painting from the Russian Museum collection) was sent by the princess to A. S. Pushkin in 1826, indicating that it was made d'après Bruni (after Bruni). It got to the State Russian Museum in 1926 from the office of the Department of Preservation and Registration of Objects of Art and Antiquities (Leningrad).

In the portrait of Z. A. Volkonskaya is personified the image of a knight from the poem "Jerusalem Delivered" (1575) by the famous Italian poet of the 16th century Torquato Tasso, which combines heroism and faith, love and disposition to heroic deeds, longing and determination. There is no representationalism required for ceremonial portraits. Romantic nature of a theatricalized character is obvious: half-fantastic costume, armour and helmet, wild rocky landscape, a shade of contemplative loneliness and longing. Volkonskaya is depicted as if dreaming, immersed in her own thoughts. The state of the model is maintained by exquisite colour: all the colours seem to twinkle, flash and retreat into the shade. She wears the costume of Tancred, the main character of the eponymous opera by G. Rossini, which was staged in the princess’s salon in Rome.