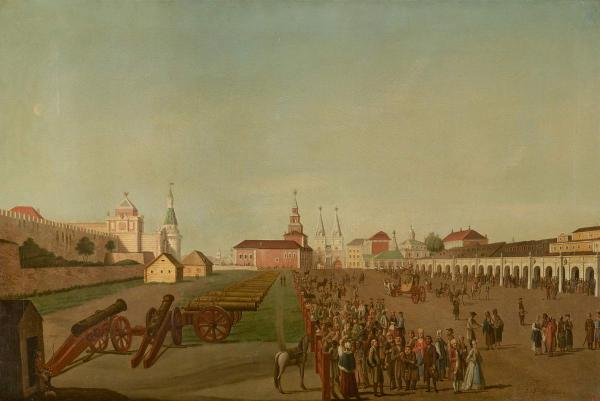 In the second half of the 18th century, Moscow attracted artists with its local colour. At that time the views of Moscow were mainly officially commissioned to the foreign masters (Jerard De La Barthe, Giacomo Quarenghi, Friedrich Hilverding, etc.). Red Square is one of the oldest parts of Kitay-gorod. The painting "Red Square in Moscow" is an important historical and artistic document of the epoch. The Kremlin still retains the features of the fortress: near the Alevizov moat (named after the architect Aloisio da Milano) we can see the defensive earthworks, which were built to protect the city from the Swedish threat during the Peter the Great period. There is also a row of cannons along the moat. The Nikolskaya Tower, which was reconstructed after the fire of 1773 by the architect Ivan Michurin, has baroque decoration. There are the old one-story shopping arcades on the right. The building of the Main Pharmacy and the tented roofs of the Resurrection Gate are in the background. The painting of Hilverding was created on the base of Russian scenography. While working in the Petrovsky Theatre and the amateur home theatre of Count Nikolai Sheremetev Friedrich Hilverding gained considerable experience in scenic design.

Therefore the Austrian artist made his work according to the principles of the stage.

The precise drawing lay in the base of the depiction and then it was painted. It explains a somewhat dry style of painting.

The artist painted three views of Red Square, which constituted the circular panorama. In addition to the work presented, there were views of the Pokrovsky Cathedral (St. Basil's Cathedral) and the ancient estate of the Khrushchevs-Seleznevs which history dates back to the beginning of the 18th century (currently, the State Pushkin Museum). The drawing of the composition "Red Square in Moscow" is in the State Tretyakov Gallery.