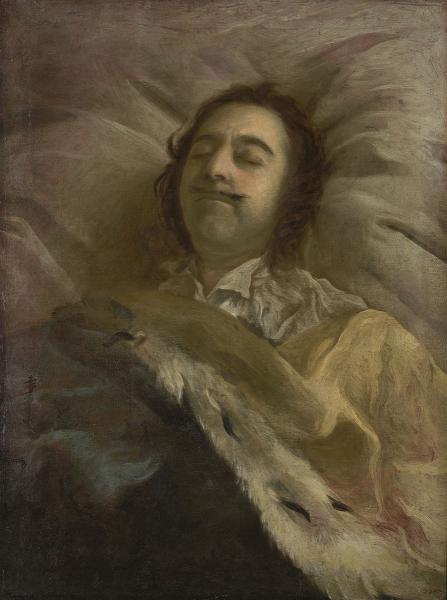 Peter I on His Death Bed

The painting of Nikitin may be perceived as a requiem for the "father of the fatherland." Immediately after the death of Peter I Nikitin was invited to embody the dead emperor. The portrait introduces the tsar, dressed in a white shirt, covered up to his chest with the yellowish draped fabric with a blue ermine mantle. The image of Peter I is full of majestic solemnity.

The portrait reflects deep and sincere sorrow: for Nikitin Peter I was not only the emperor, but the close and familiar person whose death was a personal loss for the artist. Master traced every wrinkle, every fold, every strand of hair, as if he felt his responsibility towards future generations.

Death has already distorted the face of Peter. But looking at the picture of the dead emperor, one can understand the greatness of his lifetime. In 1762 by order of Empress Catherine the portrait was transferred from the old wooden Winter Palace on Nevsky Prospekt near the Police Bridge to the Imperial Academy of Arts.

Peter was the fourteenth child of Tsar Alexis Mikhailovich; his father's first child with Natalia Naryshkina. He was baptised by Protopope Andrei Savinov on June 29, the Feast of Saints Peter and Paul, in the Chudov Monastery (according to other sources, in the Church of St. Gregory of Neocaesarea, Moscow) and given the name Peter. After his father’s death in 1676, Peter’s half-brother and godfather, Tsar Theodore Alexeyevich, became his guardian. Upon his death, Peter was proclaimed Tsar on April 27 (May, 7), 1682. This triggered the Streltsy Uprising, which resulted in the deaths of many Naryshkin supporters and the coronation of Ivan and Peter on June 25. Tsarevna Sophia became regent. Peter stayed with his mother, Natalia Naryshkina, in the village of Preobrazhenskoye, where he formed the first two new order regiments, Preobrazhensky and Semenovsky, and organised meetings of the “Drunken Synod of Fools and Jesters.” Foreigners Franz Lefort and Patrick Gordon became his closest associates. On January 27, 1689, Peter married Eudoxia Lopukhina. They had three sons: Alexis (February18, 1690 – June 26, 1718), Alexander (October 3, 1691 – May 14, 1692), and Paul (1693–1693). During August of 1689, confrontations between Peter and Sophia began to sharply intensify. Fearing assassination, Peter fled to the Trinity Lavra of St. Sergius on the night of August 7-8, accompanied by a small retinue. On August 8 both Tsaritsas, Natalia and Eudoxia joined him followed by the “Toy Army” and the artillery. Peter issued several decrees, demanding that existing regiments based in Moscow obey him as their rightful ruler. Sophia, recognizing her defeat, subsequently was confined to the Novodevichy Convent; while Peter’s elder brother, Tsar Ivan, effectively ceased intervening in affairs of the state.

The Capture of the Ottoman Fortress of Azov (July 19, 1696) in two Azov campaigns (1695–1696) became Peter’s first serious victory. Russia gained access to the Black sea. In 1697–1798 Peter the Great travelled to Europe for the first time as a member of the Grand Embassy. He visited Riga, Königsberg, Brandenburg, Holland, England, and Austria; he also planned to visit Venice and meet the Pope. He studied shipbuilding and military science in Holland and in England; the Grand Embassy recruited several hundreds of specialists to work in Russia. In July 1698 news about a new Streltsy Uprising in Moscow interrupted the mission. When the Tsar arrived in Moscow on August 25, investigation and interrogations took place resulting in almost simultaneous execution of 800 Streltsy. Tsarevna Sophia was made to take the veil under the name of Susanna. Eudoxia Lopukhina, whom Peter never loved, shared her fate: she was sent the Intercession Convent of Suzdal. And transformations began. On August 26, 1698 Peter issued his famous decrees on Western dress, shaving beards and moustaches, and Old Believers’ clothing. In 1700 the New Year was moved to January 1. After his coming back from the Grand Embassy, the Tsar began preparations for war with Sweden to gain access to the Baltic Sea. In 1699 Denmark, Saxony and the Polish-Lithuanian Commonwealth joined Peter’s Northern Union against Charles XII, King of Sweden. The Northern War started with a failure: on November 19 (30), 1700 Peter’s army was defeated at Narva. In autumn 1702 Peter renewed the war. He seized the fortress of Noteburg (that he renamed Schlisselburg) on the Baltic seashore, and in spring 1703 he took the fortress of Nyenschantz at the mouth of the Neva river. On May 10 (21), 1703 Peter (who was then Captain in the Bombardier Company of the Life-Guards Preobrazhensky Regiment) received the Order of St. Andrew the Apostle the First-Called, which he had established himself, for brave capture of two Swedish vessels. On May 16 (27), 1703 he founded St. Petersburg, and placed a Russian naval base, the fortress of Kronslot (later Kronstadt) on the island of Kotlin.

In 1706 Charles XII, King of Sweden started a new campaign. Expecting to get support against Russia from the Little Russia hetman Ivan Mazepa, Charles XII sent troops to the Ukraine. In response, Peter personally commanded the cavalry corps of Alexander Menshikov at the Battle of Lesnaya, which took place on September 28 (October 9) and resulted in the crushing defeat of Lewenhaupt corps that were about to join the army of Charles XII coming from Livonia. Peter would later celebrate the anniversary of this battle as the decisive turning point in the Northern War. On June 27 (July 8), 1709 the army of Charles XII was completely defeated at the Battle of Poltava. During the years 1714–1720 the Russian army achieved more land and sea victories in the Baltic area. On August 30 (September 10), 1721 Russia and Sweden concluded the Treaty of Nystad, which ended the 21-year-long war. Russia gained access to the Baltic sea and annexed Ingria, Estonia, Finland, and part of Karelia. On October 22 Peter was accorded the title of Emperor of All Russia, Great Father of the Fatherland.

During the reign of Peter the Great Kamchatka was annexed by Russia. His most significant foreign policy undertaking after the Northern War was the Persian campaign of 1722–1724 resulting in annexation of the Western and the Southern coast of the Caspian sea including the towns of Derbent and Baku, and the provinces of Gilan, Mazandaran, and Astarabad. On February 5 (16), 1722 Peter issued a decree on succession to the throne (which was annulled by Paul I 75 years later) abolishing the old rules of succession of direct descendants in the male line, and stating that the reigning monarch could nominate his own successor. On May 7, 1724 Peter crowned Catherine as empress-consort and made her his co-ruler, but later suspected her of adultery. He failed to nominate his own successor before his death.