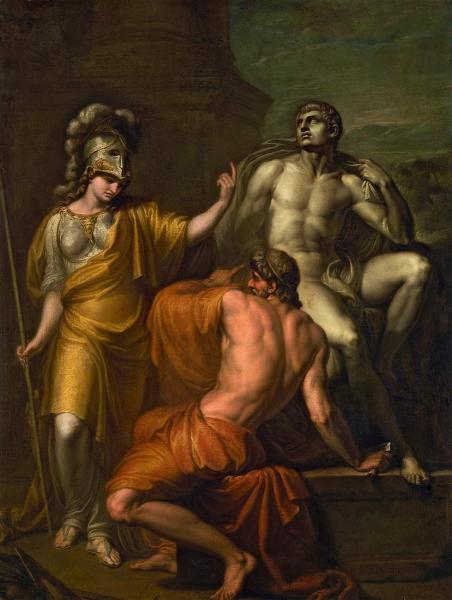 Prometheus Making a Statue at the Command of Minerva

In 1775 The Council of Academy of Arts assigned the artist, who came to Italy as a scholar, to the topic — “Prometheus Creates a Statue on Minerva’s Order”. The subject is based on an interpretation of myth, described in Ovid’s “Metamorphoses”. The Giant Prometheus made a statue of a woman, who being enlivened by gods was to become the founder of mankind.

“Thus, that which had been lately rude earth, and without any regular shape, being changed, assumed the form of Man, till then unknown”

This topic was popular in 1770s due to the often comparison of Catherine the Great to Pallas Athena (this metaphor was very popular in solemn odes in honor of Russian war victories). The role of Peter the Great was compared to that of Prometheus, the founder of civilization. The canvas demonstrates the artist’s masterful knowledge of all types of modeling and plastic architectonics of naked human body; it is distinguished by its peaceful balanced composition, neat painting, and ease of perspective disposal.

For this painting Akimov was granted with title “appointed” in 1778.