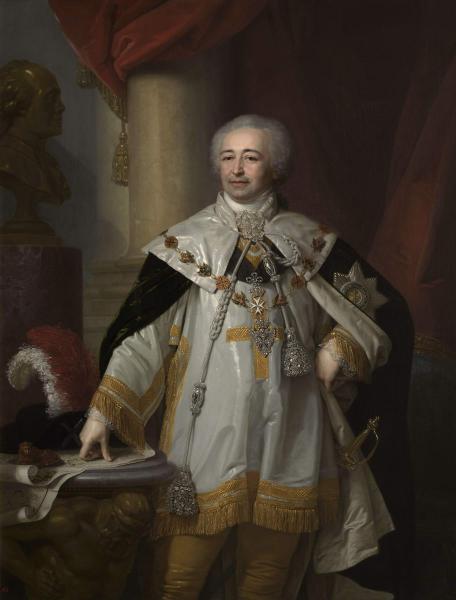 Prince Alexander Kurakin is depicted in the mantel of St Andrew, worn above a dalmatic of St John of Jerusalem, with the chain and star of St Andrew and the cross of St John of Jerusalem. Prince Alexander Borisovich Kurakin (1752–1818): Russian statesman, diplomat. Fellow pupil and close friend of the future Tsar Paul. Studied at Leipzig University. Gentleman of the bedchamber and procurator-general of the Senate (1778). Vice chancellor (1796), dismissed (1798), reinstated (1801). President of the Ministry of Foreign Affairs (1801), member of the State Council (1802). Helped to negotiate the Treaty of Tilsit with Napoleon (1807). Visited Vienna with a Russian diplomatic mission. Russian ambassador in Paris (1809–12). Buried in the parish church of St Mary Magdalene in Pavlovsk, where the inscription on his gravestone To the Friend of My Husband was written by Empress Marie Fyodorovna.