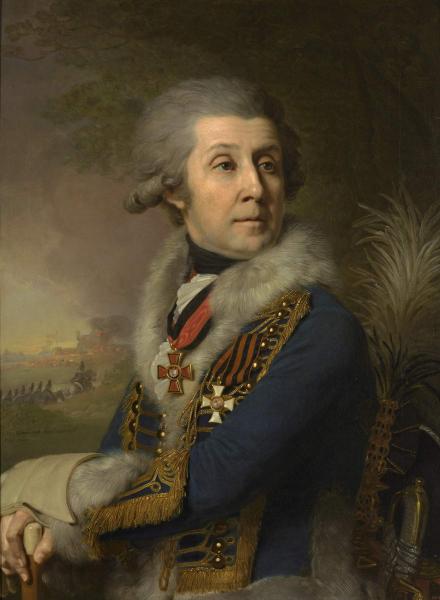 Feodor Artemyevitch Borowsky (1746–1805) – the army general, the close associate of A.V. Suvorov, M.I. Kutuzov and N.V. Repnin. At the end of 1760 – the adjutant of the regiment of yellow Hussars. In 1768 he participated in the work of the Commission on composing a New Codex as a representative of the nobility of the Novorossiysk province. From 1796 he was the commander of the regiment of Hussars named after him. That regiment stood near Mogilev. In 1797 on a false denunciation Fedor Artemyevitch Borowsky was brought to justice, and thus, resigned. In March 1798 he was arrested, but was soon justified by the verdict of a special commission. Being retired, by the decree of Paul I he got permission to wear his uniform.

The artist depicted general Borowsky in the embroidered hussar uniform with the Order of St. George that was an award for military merit. He is introduced to the audience as brave, courageous, but at the same time quite ordinary person. Probably, this characteristic comes in some disagreement with the general upbeat tone of the portrait. But most of all it is an evidence of the brilliant author's observation. Energetic turn of the head gives a portrait a certain pathos.