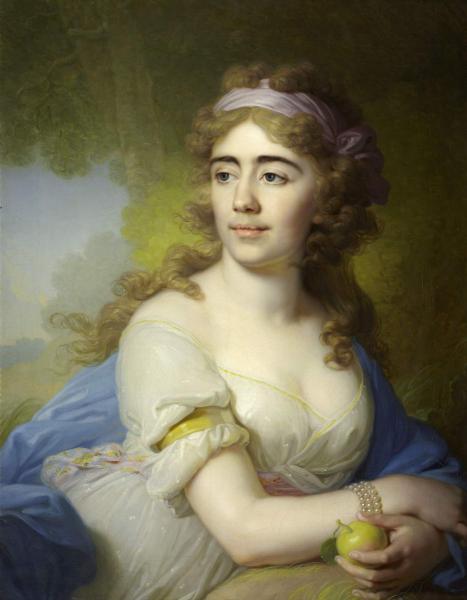 Portrait of Skobeyeva, Wife of the Smolensk Landlord D. Skobeyev

At the end of the eighteenth century Borovykovsky created a series of portraits (mostly female) and established in portrait painting a so-called new type of man, "not composed, but discovered only by him " (portraits of V.I.Arseneva, M.I.Lopuhina, N.A.Naryshkina , M.A.Orlova-Denisova, and etc.). In the portrait of Skobeeva (name and patronymic are unknown), as in most others, the artist has used his compositional scheme: “half-figure” model with distinctive portrait features is depicted with arms crossed in a light dress on the background of a landscape.

Open energetic face with large features expresses determination and courage. This impression is supported by the facts from biography of the heroine of the portrait. Skobeeva was the daughter of the Kronstadt sailor. She was a pupil and mistress of D.P. Troshchinsky, the State Secretary of Catherine II. There is a version that in an effort to confront her ambiguous position, the girl ran from a guardian and married a poor Smolensk landowner D. Skobeev.

Perhaps as a sign of approval of the union the spouses decided to have a portrait painted by the most fashionable portrait painter of those times. The head of the family ordered the artist two portraits of his wife: in the bosom of nature (the portrait) and the image of inaccessible Diana (Skobeeva as Diana. The end of the 1790s. The State Historical Museum. An embodiment of the portrait of smaller).