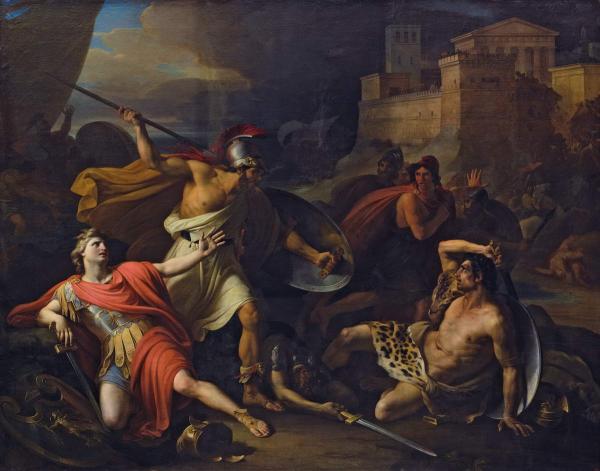 In this painting, Pyotr Basin treats a subject from Plutarch’s “Parallel Lives”. In the story of Alcibiades, who was the nephew of Pericles, the ruler of the ancient Thebes, Plutarch writes: “Whilst he was still a very young man, Alcibiades served as a soldier in the campaign of Potidæa. He shared a tent with Socrates and stood together in battle. During a fierce battle, in which both of them distinguished themselves, Alcibiades fell wounded and Socrates threw himself before him to protect him and, in the sight of all, saved his life and armour.

This painting shows the professionalism and the impressive knowledge of the artist, but also displays some of his hidden inspirations. Indeed, the representations of the wounded Alcibiades and the defeated warrior, who seem to mirror each other, derive from the antique archetype of the Roman sculpture "The Dying Gaul”. For this painting, Pyotr Basin received the title of academician in 1831.

The battle of Potidæa took place in 430 BC during the first Peloponnesian war. Alcibiades (451–404 BC) was Socrates’ pupil and later became an outstanding Athenian statesman and commander.