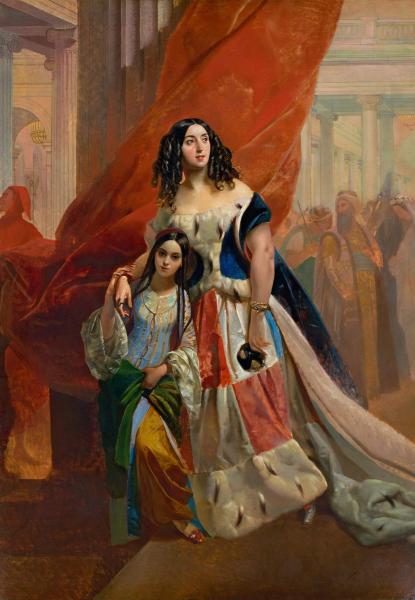 Portrait of Countess Yulia Samoilova Retiring from a Ball with her Foster Daughter Amazilia Pacini. Unfinished

Karl Brullov appears to have painted this portrait in St Petersburg in 1839–40, when Countess Yulia Samoilova came to Russia for family reasons.

Countess Yulia Pavlovna Samoilova (1803–1875): Last of the Skawronski family. Daughter of cavalry general Count von Palen (1775–1834) and Countess M. P. Skawronska (eldest daughter of Countess E. V. Skawronska and niece of Prince Grigory Potemkin). Married the aide-de-camp Count Nikolai Samoilov (1825), the Italian singer Peri and then the French diplomat Count de Morné. After divorcing the latter, she returned to the surname of her first husband. Karl Brullov made the acquaintance of Countess Yulia Samoilova in Italy in the 1820s. They became very close friends and at one point even talked of marrying. Countess Samoilova did not have any children of her own. She raised two Italian girls, Amazilia and Giovanina Pacini, daughters of the composer Giovanni Pacini.