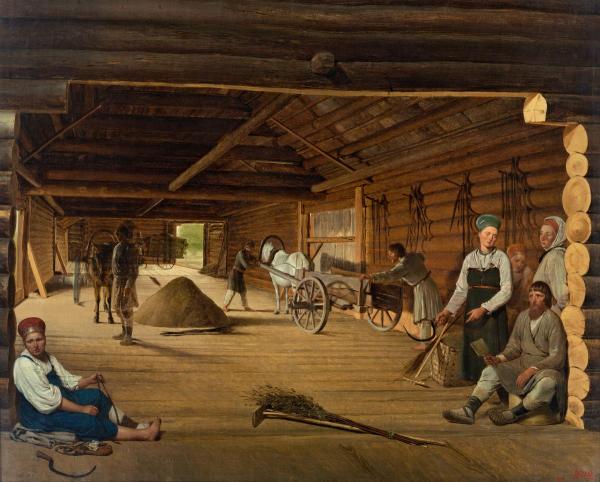 Alexei Venetsianov claimed to have been inspired to paint this particular work after seeing François-Marius Granet’s Interior of the Choir in the Capuchin Church on the Plazza Barberini in Rome, acquired for the Imperial Hermitage in 1821. For more than a month, he spent every day in the Hermitage, looking at the picture. Venetsianov began painting Threshing Barn from life in the village of Safonkovo in Tver Province in summer 1822, continuing the following summer. On 22 June 1823, he wrote to N. P. Milyukov that he hoped that the work would eventually hang on the same wall as Granet’s painting. Venetsianov first showed his canvas in his studio in 1824. He wrote to Milyukov on 27 March 1824: “My Threshing Barn has been well received by everyone, except the artists, though the emperor has still to see it.” In April 1824, the painting was acquired by Tsar Alexander I for three thousand roubles.