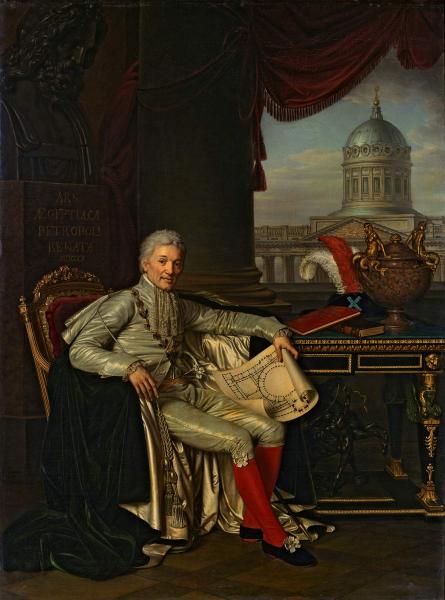 Alexander Stroganov (1733–1811) was a Count and the son of Sergei Stroganov and Sofia Stroganova (née Naryshkina). From 1752 through 1757, he studied abroad. In 1761, he was created Count of the Holy Roman Empire. In 1762 he was made Chamberlain and in 1770, privy councillor; he was a senator and was made Great Chamberlain in 1796, and in 1798 Count of the Russian Empire, and he was Director of the Public Library. He was made President of the Imperial Academy of Arts in 1800. From 1784 until 1811, he was the Province Marshal of the Nobility for St Petersburg, and was made a member of the State Council in 1801. He was a collector. He personally compiled and published a small portion of his collection under the title “Catalogue raisonné des tableaux, que composent la collection du comte A. de Stroganoff”. He was married twice. His first wife was Anna Vorontsova, and his second was Princess Yekaterina Trubetskaya.